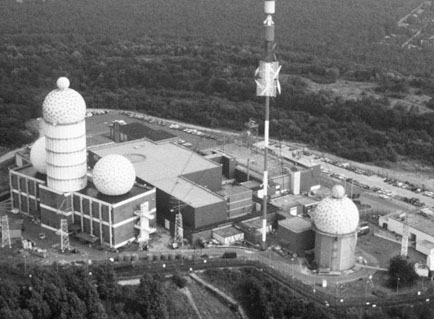 Evoking memories and emotions in buildings and people. [Natasa Petresin]: »Only stupid people believe in things they can see or touch«, said an old man in a haunted and beautiful Icelandic film Cold Fever (1994) by Fridrik Thor Fridriksson. The followers of the traditional esoteric teachings and currents from the old to the new age, as well as someone as brave as Friedrich Jürgenson with his electronic voice phenomena experiments all nod(ded) to this simple but profound thought, but so do The Building Transmissions too. Transmission in telecommunication field stands for the act of transmitting meaningful or futile electrical messages, the signals and noises. In information theory it is the process of the communication of a message or information with help of a channel. The content is not necessarily delivered in an evocative way, but it is an evoking one.
There are a few constant ideas and themes that the collective The Building Transmissions is evoking throughout their many projects which freely move between sound, visual and architectural practices. One of these ideas is finding the means of visual or other sensational translation of the physicality of sounds. At their performances the sound appropriates the laws of an object, one feels it as a trembling inside of one’s body caused by the manipulating of the feedback loops, one sees it in the form of a contact microphone attached to a pencil drawing the same patterns repeatedly, one listens to how a particular location is sounding, how the movement are confined due to the given architectural limitations.
The other is producing a dynamic subjective space through tracing and defining movement, memories, sounds and ongoing collaborative practices. We tend to become sensory deprived of crucial qualities of the spaces we inhabit daily, as we render them to their basic status of being there for granted. The Building Transmissions are evoking those potential physical, emotional or historical ontologies that exist next to the way we inhabit spaces, those invisible cities as Italo Calvino called the states of sensibly uncertain constructions and habitats, those ghostly recordings or documents of ghost presences that Friedrich Jürgenson was archiving for years in order to transmit the memory that is there but is difficult to perceive.
Close to this production of subjective spaces is a documenting activity of the collective, which tends to record all what is being thought of, said, reflected, seen, chased, discovered, traveled to or collectively produced, and re-transmit this constantly building archive into the future projects. As in historical archives that never reflect the objective reality in the past and in the present due to political reasons but also due to the fact that they are never total or complete, similarly our memory is dynamic memory, adapted and changed literally everyday.
Tendencies in rendering the vast library of immaterial and ungraspable events and situations to a certain form result in a three-, or let us say, four-dimensional sonic architecture, as The Building Transmissions themselves often describe their practice. Through their adjustable, elastic collaborative relations the BT define the pool of memories, relationships and the discipline of working-together as that specific immateriality that they are interested to translate.
Building Transmissions, activ as a collaborative unit since 2001.
www.buildingtransmissions.com