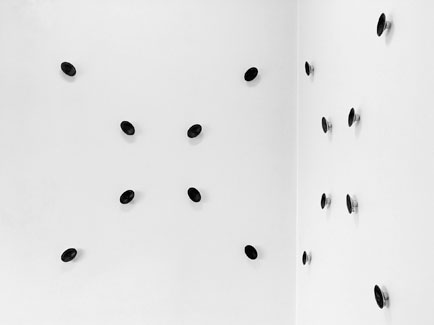 Corner 2000/06, Installationsansicht, Sculpture Center, New York 2000
[Kjartan Pierre Emilsson]: Sound is a temporal structure. It inhabits the realm of silence, and indeed defines silence with its absence. In silence we are denied any measure of time and are instead faced with a formlessness that for all practical purposes is akin to eternity.
The sinusoidal wave, the most basic and elementary form of sound, breaks up this silent void. Its main characteristic is its pitch: a perfectly defined piece of time, which through its multiplication and proliferation invades silence and structures it in a regular temporal grid. But this Cartesian backdrop still lacks an important component: Our pieces of time are free to align themselves as they see fit, with no way for us to pinpoint a past, present or future.
Imposing a fixed reference leads us to another characteristic of sound: ist phase. Choosing a phase is an act of free will, but once chosen, it solidifies our elementary temporal structure, as all our little pieces of time must now submit themselves to our whims. But how do we impose our will on this ethereal substance? How can we capture it from its natural element, pin it down and mould it?
Finnbogi Petursson uses a confined trap made of water and light. Confinement is a spatial term. It defines limits and boundaries between where one substance ends and another one starts. When the sinusoids traverse the aquatic medium they engage it, attempting to transcribe their rhythm on its flexible surface. But the water is not as free flowing as its beguiler. Indeed it is limited and confined by its vessel and must submit to its carcan. Thus a phase gets selected and the water will accommodate itself into a spatial pattern being the marriage of the vessel that confines it and the sound that tries to free it. Light, also a sinusoidal wave, is then used to further project the fruit of this union back into the immateriality of lights and shadows that we can contemplate, like glimpses of perfect shapes in Plato's cave.
In this way Petursson has captured a spatio-temporal building block which he can use to creatively elaborate a sculpture that both lives in space and time, is both confined and pervasive, is static yet always moving. We live in a world filled with a cacophony of sounds and a jumble of spaces, both confined and open. The sum total of the interaction between these two defines our everyday experience. In his work Petursson has singled out and distilled this interaction to its purest form, allowing us to reflect on this basic component of our existence.
Finnbogi Pétursson, born 1959 in Reykjavik [IS], lives in Island www.finnbogi.com